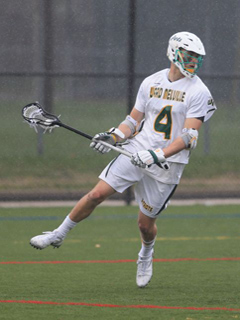 The Lt. Ray Enners Award is given to one lacrosse player in Suffolk County by the Suffolk County Boys Lacrosse Coaches Association. The winner must be an All-County player and an athlete who best exemplifies courage, teamwork, skill and leadership.

Zach Hobbes an All-American and the Warrior/U.S. Lacrosse Northeast Boys’ Lacrosse Player of the Year,  also won the Lt. Ray Enners Award as the top lacrosse player in Suffolk County, and was named Section XI Spring Male Athlete of the Year.

Perhaps the biggest honor for Hobbes is winning the Enners, which signifies leadership and sportsmanship and represents one of Long Island’s most famous war heroes. Enners, a Half Hollow Hills alum and Army officer, died in Vietnam rescuing one of his platoon members who ironically was also from Long Island.

Zach Hobbes wrapped up a memorable senior season at Ward Melville High School. Personal accolades aside, the Patriots went 21-1 and captured yet another New York State championship and finished the season ranked No. 1 in the nation. The Harvard-bound Hobbes is a major reason for the team’s success.